10,54
0,050 (0,48%)
Temps Réel
Marché Ouvert
10,54
Introducing: The Real Web 3.0
28 Avril 2022 - 11:44AM
NEWSBTC
Are we finally on the verge of upgrading our internet infrastructure to its long-awaited next generation, known as Web 3.0? The first version of the Internet consisted of read-only, static websites, whereas Web 2.0 introduced the opportunity to engage with, and create content, enabling activities such as social networking, online banking and shopping. But it has serious flaws around security, privacy, and censorship. On top of that, the dominance of tech giants has only contributed to the further exploitation of users. Web 3.0 is changing this by defining new standards for the Internet using blockchain technology. And while many “web3” projects are still critically relying on centralized services, such as centralized domains, cloud storage, and browser extensions (deserving to be called Web 2.5 instead), there is one startup,  Point Labs, which is pushing for a radical decentralization of all main internet components, finally coming close to fulfilling the complete definition of a real Web 3.0. What is Point Network? Point Network is a software suite, consisting of blockchain-based peer-to-peer network Point Chain, a locally running node called Point Core, and a decentralized browser called Point Browser, providing all that is needed to enjoy the full Web 3.0 experience. Instead of centralized domains, that can be taken away by ICANN and the U.S. government at any moment, it features decentralized domains, living on the blockchain. Instead of relying on cloud storage, everything on this new internet has to come only from Arweave, which is a decentralized storage network, thus providing data integrity and censorship resistance for websites and dApps. Powering this economically is POINT,  a utility token designed mainly for micropayments to storage providers and validators for the usage of the decentralized internet. In the current crypto-sphere, users are forced to deal with a lack of standards, configuring and maintaining a patchwork of diverse blockchains and dApps, each with its implementation of common parts. Standards like ERC-20 and Metamask API have helped a little; however, Point Network aims to solve all of these challenges using a special Web 3.0 browser called Point Browser, and a locally running node software Point Core. As a result, a web3 user only has to log in to Point Browser with one seed phrase to immediately be allowed to access decentralized websites and dApps on Point, Ethereum, Solana and other chains, or even send Bitcoin and Bitcoin Lightning transactions. Creating More Opportunities Once the main infrastructure for a real Web3 is created and operational (and the company have already launched a public alpha with a growing userbase), it opens up a world of possibilities for web3 dApps. For instance, when the Point Labs recently released their roadmap (which, unlike other crypto projects, is not merely a few points on a timeline, but a whole Trello-shaped website), it became clear that they are working on Point Social, a decentralized censorship-resistant social network with transparent algorithms, and Point Mail, end-to-end encrypted decentralized email service supposed to surpass Protonmail in terms of privacy. However, it also becomes clear that one team, no matter the funding and the popularity, wouldn’t be able to quickly build all of the decentralized successors of Youtube, Reddit, Github, Google Drive, and so on. This is why, instead of trying to take all the Web3 pie pieces for themselves, Point Labs would be raising one last private mega-round in May before the public launch, which could help fund and support with grants several startups in parallel, building the necessary Web3 apps on Point. This means that this is the prime time for the next Steve Jobses, Larrys and Sergeys, and Jack Mas to claim a stake in the terra-incognita of Web3. How soon can we enjoy real Web3? Recreating the internet from scratch with enforced decentralization on every level is no small feat and requires a lot of research, engineering and testing. There is already a public alpha of Point Network, with which anyone wishing to become an early adopter can explore the network and a Telegram group where they can enroll as an alpha tester to get some USDC for providing feedback. Point Network is still in its early days and hasn’t yet morphed into its final form, just like the internet of the 90s couldn’t have possibly prepared us for the unimaginable possibilities which would come decades later. However, this is enough for curious minds to get a taste of what a real Web3 could be like, and take part in molding its early history, by sharing feedback and discussing ideas within the community, contributing to Web3 becoming a successful reality sooner.
Arweave (COIN:ARUSD)
Graphique Historique de l'Action
De Mai 2022 à Juin 2022 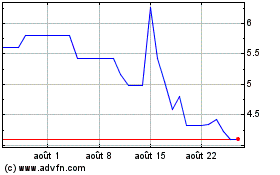 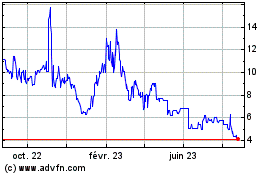 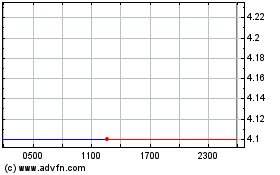