11,04
0,120 (1,10%)
Temps Réel
Marché Ouvert
11,04
Five GameFi Crypto Tokens that You Should Be Playing
31 Janvier 2022 - 12:26PM
NEWSBTC
The crypto market seems to have lost its luster for a while now, with the overall market valuation falling below $2-trillion. Despite Bitcoin’s 13th birthday celebrations, the crypto carnage has persisted. The blue-chip cryptos are now battling for action with a dramatic drop in volumes. However, the current drop has not affected some tokens and has not deterred investors, who are now looking for tokens to fill their bags. Here are a few expert-picked crypto tokens that are showing great potential. Axie Infinity ($AXS) Axie Infinity is a play-to-earn game that allows users to buy, breed, and sell Axies (pets) against one another in order to win in-game crypto called the smooth love potions, which you can convert into real money. Players can cash out their tokens regularly. Smooth Love Potion ($SLP) and Axie Infinity Shard ($AXS) are the two types of tokens in the game, and both are tradable on crypto exchanges. $SLP is used for in-game transactions and rewards whereas $AXS is the governance token that powers the entire ecosystem. Axie Infinity, which runs on its own sidechain Ronin, has gained enormous popularity in 2021. Decentraland ($MANA) $MANA is the native token of Decentraland, a growing blockchain-powered virtual world based on the Ethereum blockchain. This project began in 2017 as a foundation for developing multiplayer games, but it quickly gained traction due to the metaverse buzz in 2021. The Decentraland Builder contains hundreds of 3D objects that players can use to build or manufacture nearly anything in this virtual environment as game tokens. Players can use free and open marketplaces to buy and sell virtual parcels built inside Decentraland. It comes as no surprise that $MANA is one of the most popular cryptocurrencies of 2021. Players can also use $MANA to buy in-game items like avatar costumes, as well as vote on future Decentraland developments where a single $MANA token represents a single vote. Gala ($GALA) Gala is a P2E game based on the Ethereum network with its own native token called $GALA. It was founded in 2019 by Eric Schiermeyer, one of the co-founders of the leading mobile game company Zynga, that created popular games like Mafia Wars and Farmville. The game already has 1.3 million registered users and its goal with blockchain is to give users more power over their gaming experiences. The game aims to change the reality in which players spend thousands of dollars on in-game items and spend countless hours playing the game, only to have it all taken away with the click of a button. Gala leverages NFTs that allow users to vote on new games and influence how they operate. $GALA token is the heart of the system that can be used to purchase NFTs as well as in-game items. Gala One has already released their flagship game Town Star, and there are many more games in the works that are expected to launch in 2022. The Sandbox ($SAND) The Sandbox is an Ethereum-based project that allows users to construct and explore galaxies in a virtual cosmos. Initially, it launched as a normal mobile and PC game but Animoca Brands then turned into a blockchain gaming ecosystem powered by crypto and NFTs. Players in the system create and design their own characters in order to access the Sandbox metaverse’s many landscapes, games, and centers. The produced digital objects may then be monetized with NFTs and sold for $SAND tokens on the Sandbox Marketplace. Unlike other popular play-to-earn games, the Sandbox does not have a preset gameplay universe. Instead, it takes a dynamic approach, allowing users to personalize anything using free and easy design tools. FireZard ($ZARD) FireZard is a new P2E game based on the Binance Smart Chain (BSC) network. It is the first Trading Card Game that passively and instantly rewards investors in an attractive and collectible way through NFTs. The game revolves around the major five dragons that are employed to compete with other players. Each FireZard NFT Card represents a dragon and has its own set of features. Moreover, the Cards are not only collectible, but they have an instant win prize attached to them that is worth anything from 0.1 BNB to 5 BNB. Players of this game are massively rewarded with the game’s native tokens, $ZARD, and $FLAME. $FLAME tokens will only be used for in-game activities, whereas $ZARD tokens will play a much larger role in propelling the platform. With the game still in its early stages, $ZARD is expected to explode in the coming months. 2022 Will be the Year of Gaming Crypto Blockchain gaming is a rapidly expanding area within the crypto and blockchain sectors, and it is likely to expand more in the coming months. These are some of the projects that have a lot of potential and should be looked into further for 2022 and beyond.
Axie Infinity Shard (COIN:AXSUSD)
Graphique Historique de l'Action
De Jan 2023 à Fév 2023 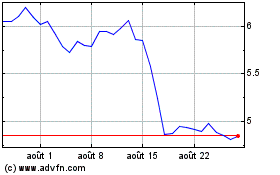 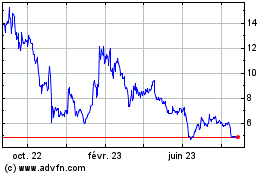 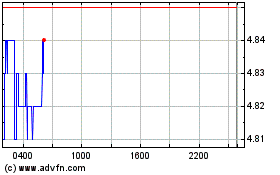