21,56
-0,020 (-0,09%)
Temps Réel
Marché Ouvert
21,56
Cosmos (ATOM) Leads Gains Among Top Coins
10 Octobre 2022 - 11:30PM
NEWSBTC
Despite being down 2.74% as of writing, Cosmos (ATOM) still leads gains among top coins in the past week. The internet of blockchains has had its fair share of roses and thorns during the week. However, data from CoinMarketCap shows that ATOM has enjoyed several peaks and is still trading in the green.  The blockchain has also experienced high trading volume within the past 24 hours, up 14.93%. It has also held its end against top coins like Wrapped Bitcoin, Cronos, and Ethereum Classic, considering the 7-Day trading activity.  Related Reading: XRP Price Hits Target Of $0.5, But Can It Break This Key Resistance? Lower Timeframe Structure Remains Bullish Despite ATOM Stall The ATOM price has produced a sequence of higher lows during the last week. Crucially, it established a short-term uptrend by breaking above the prior lower highs at $12.54 and $12.84. Higher time frame charts saw this as more of a bounce. Plus, it was met with strong resistance around the $13.4 level. As the price approaches the white ascending trendline, it may find some support there. A session closing below $13 would once again render the lower-timeframe structure bearish. This may cause prices to fall back to the $12.35-$12.4 support area. However, if ATOM can break out over $13.4, it might signal a significant upward trend. Such a rise can potentially drive ATOM over the $14.8 resistance zone that has been in place since late September. As of this writing, the RSI reading was 46. Even though it has dropped below the neutral 50 levels, there is no sign of bearish momentum. The OBV was flat as well. This indicated that neither the purchasers nor the vendors were in a position of power. It also suggested that a bullish breakthrough was less likely to occur. ATOM Records Higher Total Staked Value, Thanks to DeFi The DeFi sector on Cosmos has been booming in recent weeks. After publishing the “Cosmos Hub Roadmap 2.0,” Cosmos received great interest from investors. In addition, the native token ATOM saw growth in terms of total value locked (TVL), development engagement, and the number of holders in the third quarter of 2022. According to a tweet recently posted by the Cosmos Daily, the DeFi industry is one of the fastest-growing parts of the Cosmos ecosystem. The TVL of popular protocols like the Kava Network skyrocketed in the previous month to 291.2 million. Osmosis zone and THORChain, two other protocols, garnered $209 million and $105.85 million, respectively. Related Reading: Bitcoin Volatility Index Suggests Large Price Move Arriving Soon Still, on on-chain analytics, there was a steady increase in the number of cryptocurrency investors who held ATOM throughout the year. Despite this, there was no significant increase in the number of transactions or the volume. We also saw top DeFi platforms like dYdX move from Ethereum to Cosmos within the past week. One could say that many investors are in for the long ride, especially given dYdX’s big move and the blockchain’s plans outlined in its updated roadmap.  Featured image from Pixabay and chart from TradingView.com
Ethereum Classic (COIN:ETCUSD)
Graphique Historique de l'Action
De Jan 2023 à Fév 2023 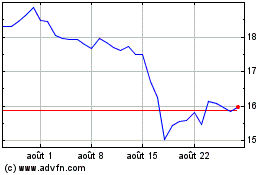 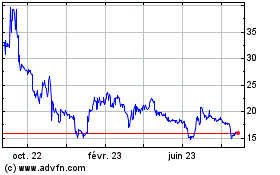 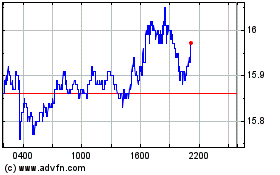