8,03
-0,700 (-8,02%)
Temps Réel
Marché Ouvert
8,03
Arcana Closes Strategic Round of $2.3 Million from Leading Investors to Deepen its Penetration into Web 3 Ecosystem
13 Octobre 2021 - 03:26PM
NEWSBTC
Blockchain firm Arcana Network has closed its latest round with a staggering $2.3 million funding from leading investors in the blockchain and crypto space. Arcana is a decentralized storage layer for DApps on Ethereum and other EVM compatible chains. The decentralized storage protocol received funding from several investors, some of which led at the strategic round. These include Republic Crypto headed by Kendrick Nguyen as the CEO, and another VC Woodstock Fund. Other investors that participated in the round include Digital Currency Group (DCG), Hyperedge, Sahil Lavingia’s shl.vc, Fenbushi Capital, LD Capital, and Paradigm Shift VC. Arcana Raises $375k from Republic Crypto, Coinbase Former CTO and Others at Seed Round During its seed round that was closed in July, Arcana raised up to $375k from several high-profile investors such as former Coinbase CTO Balaji Srinivasan, Sandeep Nailwal and JD Kanani, Founders of Polygon (formerly Matic), and Kendrick Nguyen, Founder & CEO of Republic. Arcana’s $2.3 million fundraise in the latest (strategic) round also witnessed participation from investors Ganesh Swami, CEO of Covalent, Ajeet Khurana, Builders Tribe, Nishal Shetty of WazirX, and Ajit Tripathi from Aave, along with Arcana’s seed investors Arcanum Capital. With the fresh capital at its disposal, Arcana is aiming for the zenith alongside its solutions-based products such as  Skizzle which allows for transfer of files via emails and blockchain supported by end-to-end encryption. Arcana Prepares to Launch Native Token and Others Arcana is also eyeing the launch of a native token, $XAR, that will be a core part of the storage layer. The $2.3 million will go a long way in the launch of the token coupled with other products and events. Arcana is looking at building a community following the keen interest that trailed its waitlist. Many developers joined the waitlist indicating their interest in test-running Arcana’s software development kit (SDK). With its Alpha testnet due for launch this month, Oct 2021, Arcana has onboarded several partners to test its SDK. Launched in 2019, Arcana aims to be the powerhouse for decentralized storage that developers can easily relate with. With a host of other storage platforms such as Storj, Filecoin, IFPS available in the market, Arcana is intent on offering more value to developers and their DApps. Commenting on the firm’s value propositions and their applications to different industries, CEO Mayur Relekar said; Data privacy and security will be first-class citizens in every app’s stack. Privacy and ownership of data will be a necessity for every product and developers need easy to use tools to fulfil this. With a vision to be a privacy-first and developer-friendly platform, Arcana is working with developers across sectors from DeFi, NFT platforms, Social Networks, and Wallets, to traditional web 2.0 products in Fintech, Healthcare, and Enterprise SaaS, to bring privacy and security to their data.” Arcana was founded by Mayur Relekar who is currently the CEO. Aravindh Kumar and Abhishek Chaudhary are CEO Relekar’s co-founders. Since its founding stages, Arcana has signed several partnership deals with firms sharing the same vision as itself. Some of them include fan-first sports fantasy platform Rage.fan, DIA, Headstart, India’s largest start-up ecosystem enabler.
Filecoin (COIN:FILUSD)
Graphique Historique de l'Action
De Juil 2022 à Août 2022 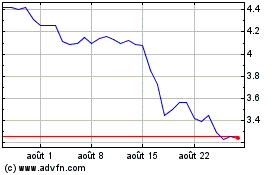 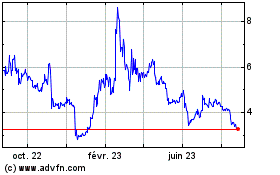 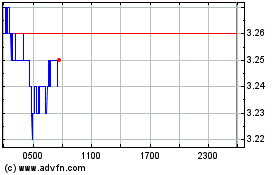