174,66
-3,84 (-2,15%)
Temps Réel
Marché Ouvert
174,66
Investors May Expect Downside For Bitcoin And Ethereum Market For The Next 3 Months
25 Mai 2022 - 01:00AM
NEWSBTC
The crypto markets have accepted the depegging of UST and the subsequent downward spiral of LUNA, both of which impacted the price of Bitcoin and the entire digital asset spectrum. According to a recent report by the Glassnode team, the Bitcoin market has been trading lower for eight weeks, making it the ‘longest continuous series of red weekly candles in history.’ Even Ethereum, the most popular altcoin, painted a similar picture. Bearish fluctuations damage returns and profit margins directly or indirectly. To make matters worse, derivative markets forecast shows more declines in the coming three to six months. Derivative Markets Hint At More Pain For Bitcoin According to derivative markets, the prognosis for the next three to six months remains fearful of further fall. On-chain, the report stated that blockspace demand for Ethereum and Bitcoin has dropped to multi-year lows, and the rate of ETH burning via EIP1559 has reached an all-time low. Glassnode calculated that the demand side will continue to face headwinds due to poor price performance, uncertain derivatives pricing, and extremely low demand for block-space on both Bitcoin and Ethereum. The report explains: Looking on-chain, we can see that both Ethereum and Bitcoin blockspace demand has fallen to multi-year lows, and the rate of burning of ETH via EIP1559 is now at an all-time-low. Coupling poor price performance, fearful derivatives pricing, and exceedingly lacklustre demand for block-space on both Bitcoin and Ethereum, we can deduce that the demand side is likely to continue seeing headwinds. Both Bitcoin and Ethereum’s price performance over the last 12 months has been disappointing. Long-term CAGR rates for Bitcoin and Ethereum have been impacted as a result of this. Source: Glassnode BTC, the largest cryptocurrency, moved in a roughly 4-year bull/bear cycle, which was frequently accompanied with halving events. When looking at long-term returns, the CAGR has dropped from almost 200 percent in 2015 to less than 50 percent as of this writing. Related Reading | New Data Shows China Still Controls 21% Of The Global Bitcoin Mining Hashrate Furthermore, Bitcoin had a negative 30% return over the short term, implying that it corrected by 1% every day on average. This negative return for Bitcoin is very similar to prior bear market cycles. Source: Glassnode When it comes to ETH, the altcoin performed far worse than BTC. Ethereum’s monthly return profile revealed a depressing picture of -34.9 percent. Ethereum likewise appears to be seeing diminishing rewards in the long run. Furthermore, during the previous 12 months, the 4-year CAGR for both assets has dropped from 100% to only 36% for BTC. Also, ETH is up 28 percent per year, emphasizing the severity of this bear. To make matters worse, the derivative market warned of future market declines. Near-term uncertainty and downside risk continue to be priced into options markets, particularly over the next three to six months. In reality, during the market sell-off last week, implied volatility increased significantly. Total crypto market cap stands at $1.2 Trillion. Source: TradingView The Glassnode analysis concluded by stating that the present bear market has taken its toll on crypto traders and investors. Furthermore, the Glassnode team emphasized that downturn markets frequently worsen before improving. However, ‘bear markets do have a tendency of ending’ and ‘bear markets author the bull that follows,’ so there is some light at the end of the tunnel. Related Reading | TA: Bitcoin Price Stuck In Key Range, Why Dips Might Be Limited Featured image from iStockPhoto, Charts from Glassnode, and TradingView.com
Gnosis (COIN:GNOUSD)
Graphique Historique de l'Action
De Juil 2022 à Août 2022 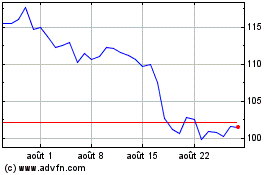 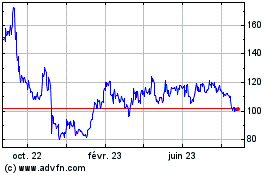 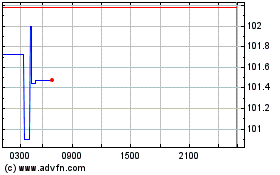