44,77
2,79 (6,65%)
Temps Réel
Marché Ouvert
44,77
Manta Network Successfully Completes its 3rd Funding Round of the Year at $28.8 Million from Squad Game Event
18 Novembre 2021 - 06:15AM
NEWSBTC
Manta Network, the privacy protocol for Polkadot, sold 80 million of its governance MANTA tokens to raise $28.8 million. The project sold 8% of its 1 billion fixed supply at its Squad Game token generation event hosted by Tokensoft, which saw widespread participation from the Manta community. This latest funding round comes after the $5.5 million funding round that took place last month, which was led by CoinFund and ParaFi Capital. Before this, it had a $1.1 million round led by Polychain Capital in 2021 itself. After winning the parachain network on Polkadot’s canary network Kusama, Manta Network is now preparing for the next stage of its development with the forthcoming Polkadot parachain auctions, which officially began on November 11. $130 million have already been pledged by users to its crowdloan initiative as parachain auctions commence. But the holders of Polkadot’s native DOT tokens can still contribute to the crowdloan with MANTA rewards. Manta’s utility tokens grant its holders rewards for MantaPay and MantaSwap usage fees in addition to on-chain community-governance rights. Building a Private Smart Contract Platform The privacy layer for the Polkadot ecosystem, Manta Network, is working to make on-chain privacy a utility through scalability and interoperability. And it has developed several platforms to improve the privacy and security of the decentralized finance (DeFi) ecosystem. For users, this means on-chain privacy in transacting and swapping any parachain assets. These DeFi-oriented privacy protocols include the automated market maker DEX MataSwap and payment protocol Mantapay, which has embedded privacy. Here, Manta basically adds a layer of anonymity to DeFi transactions by obfuscating user addresses through the application of zk-SNARKS and Groth16 proofs. It is particularly helpful for those transacting in large amounts as it can help mask their portfolio management activities. Manta Network is also building a private smart contract platform. Leveraging zero-knowledge proofs for privacy, this platform will deploy privatized decentralized applications and allow developers to build their own DApps on it to expand the Manta ecosystem. The project has a long line of prominent crypto industry backers, including Alameda Research, Polychain Capital, DeFiance Capital, CoinFund, ParaFi Capital, The Spartan Group, LongHash Ventures, Divergence Capital, Zee Prime Capital, CMS Holdings, ConSensys, Digital Currency Group (DCG), and more. Manta Network is also bringing its privacy features to the metaverse by partnering with Bit.Country. “Many other individualized worlds will be able to utilize their privacy features for their people,” says the Manta team.
Kusama (COIN:KSMUSD)
Graphique Historique de l'Action
De Août 2022 à Sept 2022 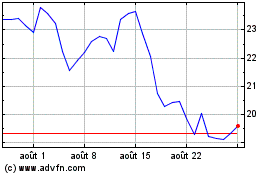 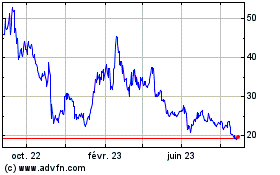 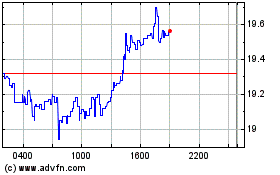