0,9394
0,0041 (0,44%)
Temps Réel
Marché Ouvert
0,9394
Polygon’s MATIC Surges 27% On Carbon Neutrality News
24 Juin 2022 - 01:00PM
NEWSBTC
According to CoinMarketCap, the Polygon (MATIC) value was increased by nearly 27% to $0.55 within 24 hours after Polygon’s news of being carbon neutral. However, the coin is still on an upward trend, and as of the time of writing, it was trading at $0.60.  The price is still below what it was at the beginning of the month when it was trading at $0.66, but considering the market downturn, MATIC’s price gain is sending out a positive vibe. It ranks as the 18th largest cryptocurrency worldwide. Related Reading | Bitcoin May Have Hit Bottom According to These Indicators, BTC Targets $23K? The value of Polygon (MATIC) increased by roughly 50%% within seven days, as per CoinMarketCap statistics. On the other hand, the leading cryptocurrencies, like Bitcoin and Ethereum, saw a week’s decline. In addition, Having peaked at $2.92 on December 27, 2021, Polygon has since plummeted nearly 80%. Although it is still 50% higher than this month’s low of 0.31 on June 18. MATIC was first created on top of the Ethereum Network and is now enhanced with Plasma-based side-chains to guarantee asset security. The main objective of MATIC Network, which calls itself a blockchain-agnostic Layer-2 scaling solution, is to enable scalable, quick, and safe blockchain transactions.  The Main Factor Driving Polygon’s Matic Value Upward Mainly two catalysts appear to be the reason for Polygon’s increasing value. Nevertheless, the most important one is Polygon’s recent announcement that it has retired $400,000 worth of carbon credits, turning the company carbon neutral. The value of its native token has increased significantly as a result of its achievement of carbon neutrality. Indian crypto exchange WazirX’s Trade Desk also claims that: Polygon(MATIC), just lately achieved carbon neutrality(a stability between emitting and absorbing carbon). This has led to a surge in MATIC value in the previous couple of days, leaping up by 30%. The hourly pattern for MATIC has damaged out of the ascending triangle sample. The subsequent resistance is predicted at $0.73 degree. Polygon stated in its blog post that through their partnership with KlimaDAO, it became carbon neutral and further explained that: In helping to implement the first phase of Polygon’s long-term commitment to sustainability, KlimaDAO, in partnership with Offsetra, analyzed the network’s energy footprint to identify emissions hotspots and develop an effective mitigation strategy. Then, utilizing the offset aggregator feature of KlimaDAO, Polygon bought tokenized credits valued at $400,000 from the on-chain carbon market. In addition, Polygon collaborated with KlimaDAO to retire the carbon credits created by particular projects on its blockchain. The Bull Run Forest Conservation Project is one of those projects.  Related Reading | Bitcoin Recovery Slows Down As Whale Inflows Remain Elevated Furthermore, whale accumulation is the second factor that drives MATIC’s price increase, according to Santiment on-chain statistics. As stated in their tweet on June 22: $MATIC sharks and whales have been in a pretty big accumulation trend for about six weeks. The tiers of holders ranging from 10k to 10m coins held have collectively added 8.7% more to their bags in this timespan. Featured image from Flickr and chart from TradingView.com
Polygon (COIN:MATICUSD)
Graphique Historique de l'Action
De Juil 2022 à Août 2022 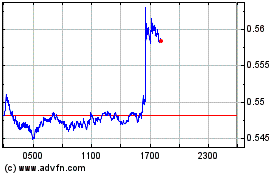