0,765
-0,034 (-4,26%)
Temps Réel
Marché Ouvert
0,765
Binance ‘s CEO Visits El Salvador. What Will He Meet President Bukele About?
24 Mars 2022 - 05:37PM
NEWSBTC
It was about time that Binance ’s CEO, Changpeng Zhao, visited El Salvador. His company is the biggest cryptocurrency exchange in the world and El Salvador is the first country to adopt bitcoin as legal tender, why did this take so long? According to the Secretariat of Communications of the Presidency of the Republic of El Salvador, Binance’s CEO is visiting the country “along with other entrepreneurs, who are interested in knowing the investment possibilities.” Hoy llegó a El Salvador el CEO y fundador de @BinanceES, Changpeng Zhao (@cz_binance), junto a otros empresarios, quienes están interesados en conocer las posibilidades de inversión, en el primer país del mundo que adoptó el #Bitcoin como moneda de curso legal. 🇸🇻 pic.twitter.com/XBYVwyZ8Dd — Secretaría de Comunicaciones 🇸🇻 (@ComunicacionSV) March 23, 2022 What will Changpeng Zhao meet President Bukele about? Reuters caused quite the commotion when they tried to guess. Related Reading | Binance’s CZ Wants Entrepreneurs To Create Coins. Does His Argument Make Sense? What Did Reuters Say About Binance ’s CEO Visit To El Salvador? As far as Reuters is concerned, CZ is visiting El Salvador to assist them with the issuance of the volcano bonds. They literally said: “El Salvador is seeking support from cryptocurrency exchange Binance for its implementation of bitcoin as legal tender and the issuance of bitcoin bonds, the Central American country’s ambassador to the United States said on Wednesday.” Is that what he’s here about, though? In the closest source we found, EFE quotes Mayorga telling “local media,” “We need businessmen his stature to support the issue of subscription to the volcano bonds.” In the ambassador’s Twitter account, Milena Mayorga welcomes Changpeng Zhao, CEO of Binance, “with the largest cryptocurrency wallet in the world.” Don’t ask. Hemos dado la bienvenida a Changpeng Zhao @cz_binance, CEO de @binance, con la wallet de criptodivisas más grande del mundo.#LibertadEconómica #Bitcoin🇸🇻 pic.twitter.com/PBExfF2Lwc — Milena Mayorga (@MilenaMayorga) March 23, 2022 According to Reuters, “Mayorga said Zhao’s visit was a vote of confidence in Bukele’s decision to adopt bitcoin as legal tender last September, as well as its plan to issue bitcoin-backed bonds.” According to her own tweets, they discussed, “strategic projects such as Bitcoin City, Surf City among others, was what we shared with the delegation of investors from Binance and companies.” Proyectos estratégicos como #BitcoinCity, #SurfCity entre otros, fue lo que compartimos a la delegación de inversionistas de @binance y empresas que nos acompañan en esta 13 misión de negocios. pic.twitter.com/l6TOJNklAm — Milena Mayorga (@MilenaMayorga) March 24, 2022 Who’s That Dark Figure Behind Binance ’s CEO? The visit of one of the great businessmen of our time is most likely a positive for El Salvador. However, who’s that behind him? Could it be…? A pseudonymous Twitter user provides the necessary blown up pictures: pic.twitter.com/1B38pZkyjW — mutatrum (@mutatrum) March 23, 2022 That’s right, notorious lurker Brock Pierce. Of course, he is one of the “other entrepreneurs.” If you squint, you can also see him in one of Milena Mayorga’s pictures. Let’s remember what our sister site Bitcoinist reported the first time that the EOS creator lied his way into the Presidential Palace:  “Something is rotten in the state of El Salvador. The first nation to declare BTC as legal tender received no other than the infamous Brock Pierce. An “Official Delegation of Bitcoin Ambassadors” reportedly met with President Bukele and other government officials. However, is there such thing as an “official delegation” of a decentralized protocol? No, there isn’t. And the whole Bitcoin community is up in arms about the situation.” And just like that, Brock Pierce is back in San Salvador. Who would’ve thought? BNB price chart on BinanceUS | Source: BNB/USD on TradingView.com President Bukele Responds To The Rumors In a since-deleted tweet, Bitcoin Magazine echoed Reuters’ take on the nature of Binance CEO’s visit to El Salvador. President Bukele asked them to “please don’t spread Reuters FUD. The Bitcoin Volcano Bonds will be issued with Bitfinex. The short delay in the issuance is only because we are prioritizing internal pension reform and we have to send that to congress before.” I’m meeting with @cz_binance tomorrow to discuss OTHER issues, not the Volcano Bonds 🌋 Unless he wants to buy some, of course 😉#Bitcoin fixes FUD! — Nayib Bukele (@nayibbukele) March 23, 2022 To that, President Bukele added “I’m meeting with Changpeng Zhao tomorrow to discuss OTHER issues, not the Volcano Bonds. Unless he wants to buy some, of course.” And Binance CEO responded, “Looking forward to it. Plenty to discuss.” And, to be fair, Reuters also said that “Zhao praised El Salvador for taking on a pioneering role in the adoption of bitcoin and said Bukele’s presidency would be remembered in “heroic” terms for its bold bet on the future.” Related Reading | Binance’s CZ Explains Why Banning Crypto Ads Won’t Affect Demand Is Binance CEO’s visit to El Salvador priced in? Will the BTC price move because of it? What about BNB? Will Binance make moves in El Salvador? Does the market care about this historic visit? The next few days will answer all of those questions. Featured Image: Changpeng Zhao in El Salvador, screenshot from this video | Charts by TradingView
Secret (COIN:SCRTUSD)
Graphique Historique de l'Action
De Oct 2022 à Nov 2022 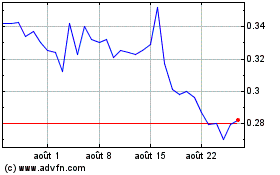 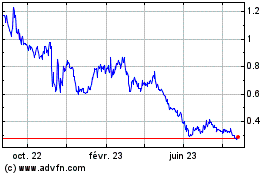 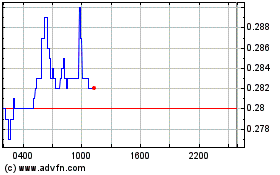