0,01897
0,00 (0,00%)
Temps Réel
Marché Ouvert
0,01897
VET Breaks Major Trend Line, Why VeChain Could See Massive Explosion
22 Octobre 2021 - 05:46PM
NEWSBTC
VeChain (VET) is on the move with a 10.3% and 51.4% profit in the daily and monthly charts, respectively. As of press time, the cryptocurrency trades at $0,13 and could further gain due to recent developments. After recording a potential bottom on October 20th, VET experienced a breakout to the upside, as analyst Justin Bennett claimed. Related Reading | VeChain Foundation Announces Vote To Implement Upgrade, Bullish For VET? With the Bitcoin season inaugurated, the first crypto by market cap has been taking liquidity from the altcoin market. In that sense, VeChain could have found a bottom in its VET/BTC trading pair with critical support at 0.123, as Bennett explained. At the time, Bennet said: VET breakout is coming. Many complain about the lack of movement. What they fail to see is that this is all just consolidation. The longer the coil, the bigger the breakout. 187 days of consolidation and counting. Yesterday, VeChain (VET) started a breakout run, the analyst said. This could put the cryptocurrency on a bullish trend but could face some obstacles if Bitcoin underperforms during the weekend. The Worst-Case Scenario, Still A Win For VeChain (VET)? VeChain has consolidated major partnerships around the world especially in Asia. The platform seems to be part of China’s national blockchain plan, as suggested by its appearance on state-backed media. Related Reading | How This VeChain Tool Will Aid Enterprises To Reduce Carbon Emissions As noted by the VeChain Foundation, they were awarded a certificate from the China Association for Standardization, an institution operating under the State Council. The award was granted to the company due to their “major contributions to the T/CAS 493-2021 Standard for household electrical equipment”. This goes to show the deep tights that the VeChain Foundation seems to have with the Chinese government and its potential to gain more relevance over the next years. #VeChain received a certificate from the China Association for Standardization, a body under the State Council, for our major contributions to the T/CAS 493-2021 Standard for household electrical equipment. Our #blockchain tech is becoming the industry standard. $VET $VTHO pic.twitter.com/GnEccflQon — VeChain Foundation (@vechainofficial) October 22, 2021 Bennett noted the importance of VeChain’s expansion in the business world with collaboration with U.S.-based giant Walmart and recently DHL to enter the Non-Fungible Token (NFT) market. The analyst said on VET’s potential to run hotter than Ethereum: VETETH supports the idea that #VET will end this cycle with another period of outperformance beginning in the next few weeks. Related Reading | This VeChain Partnership Will Enable VET Holders To Buy On Ebay, Amazon And Others In the coming months, the worst-case scenario for VET holders could still score them great profits as Bennett expects the cryptocurrency to take over its April trend line. During this period, VET could trade at $1 driven by the FOMO effect triggered by Bitcoin and Ethereum reaching a new all-time high. Even if VETETH only moves back to its April high and $ETH is around $10,000, it puts VET just over $1. If this pattern plays out again and ETH is $10,000 at the time, VET is closer to $1.50.
VeChain Token (COIN:VETUSD)
Graphique Historique de l'Action
De Nov 2022 à Déc 2022 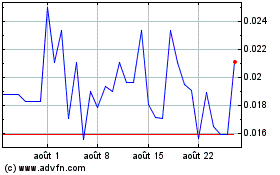 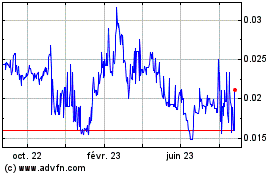 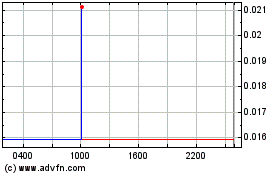