ATHENE HOLDING LTD.
Second Floor, Washington House
16 Church Street
Hamilton, HM 11, Bermuda
(441) 279-8400
Indicate by check mark whether the registrant is an emerging growth company as defined in Rule 405 of the Securities Act of 1933 (§230.405 of this chapter) or Rule 12b-2 of the Securities Exchange Act of 1934 (§240.12b-2 of this chapter).
Emerging growth company ☐
If an emerging growth company, indicate by check mark if the registrant has elected not to use the extended transition period for complying with any new or revised financial accounting standards provided pursuant to Section 13(a) of the Exchange Act. ☐
Item 5.02.    Departure of Directors or Certain Officers; Election of Directors; Appointment of Certain Officers; Compensatory Arrangements of Certain Officers.
Employment Agreement
On June 16, 2022, Athene Holding Ltd. (the “Company”) and James R. Belardi, Chief Executive Officer of the Company, entered into an amended and restated employment agreement (the “Agreement”). The new Agreement combines and supersedes the two separate employment agreements Mr. Belardi had been party to since February 2013, with no change to his base salary or annual incentive bonus opportunity.
The two separate employment agreements had been with the Company and Apollo Insurance Solutions Group LP (“ISG”), an indirect subsidiary of Apollo Global Management, Inc. (“AGM”). Under the Agreement, Mr. Belardi will be employed by the Company. He will continue to serve as both Athene Holding Ltd.’s Chief Executive Officer and ISG’s Chief Executive Officer. Mr. Belardi’s annual base salary of $1,875,000 and target annual incentive bonus opportunity of $1,850,000 will be the same aggregate amounts as were payable under his prior employment agreements. All Agreement amounts will now be paid by the Company. Any annual incentive bonus may be paid in the form of cash or publicly tradeable securities that vest in annual installments (such amount is expected to be paid in the form of restricted share units for services performed in 2022). The initial term of the Agreement will expire on December 31, 2022, and will automatically extend for subsequent one-year terms unless Mr. Belardi gives or receives notice of non-renewal prior to expiration of the then current term.
Consistent with his prior employment agreements, under the Agreement, severance is payable to Mr. Belardi on a termination of employment by the Company without cause or by reason of nonrenewal of the term of the Agreement, by Mr. Belardi for good reason, or due to Mr. Belardi’s death or disability (an “Involuntary Termination”), equal to his annual base salary and a pro rata annual incentive bonus for the year of termination. Upon an Involuntary Termination other than due to death or disability, Mr. Belardi is also entitled to additional severance equal to his last year’s annual incentive bonus. In addition, upon an Involuntary Termination, outstanding and unvested equity awards granted as a component of an annual incentive bonus will immediately vest. Severance payments and benefits are conditioned on Mr. Belardi’s execution of a general release of claims in favor of the Company and its affiliates.
The Agreement contains customary restrictive covenants, including confidentiality and nondisclosure covenants, covenants not to compete or solicit customers for 12 months following termination, and a covenant not to solicit employees for 24 months following termination.
In 2009, Mr. Belardi co-founded ISG and was granted Class B Interests in ISG’s parent, AISG Holdings LP. These Class B Interests provided Mr. Belardi 5% of the profit of ISG (the “ISG Profits Interests”). On June 16, 2022, the partnership agreement of Apollo Insurance Group Holdings LP (the “Partnership Agreement”) was amended such that the ISG Profits Interests provide quarterly distributions equal to 3.35% of base management fees and 4.5% of subadvisory fees, consistent with the Fee Agreement by and between ISG and the Company, and the Fee Agreement by and between ISG and Athene Co-Invest Reinsurance Affiliate 1A Ltd, each as in effect from time to time. This formulation was intended to be substantially equivalent in value to the ISG Profits Interests’ previous 5% profit participation under the Partnership Agreement. The move to revenue sharing provides long-term alignment to invest in the ISG business to support future growth.
Under the Partnership Agreement, on an Involuntary Termination, or a resignation that satisfies the Partnership Agreement’s notice and other requirements, on or after December 31, 2023, the ISG Profits Interests will be redeemable for an amount equal to five times the average annual distributions on the ISG Profits Interests for the preceding two years. The ISG Profits Interests will also be redeemable for a prorated amount in the event of an earlier Involuntary Termination, based on the number of days that precede such termination during the three-year period ending December 31, 2023. Any redemption of the ISG Profits Interests is subject to Mr. Belardi’s continued compliance with all applicable restrictive covenants, and may be settled in cash or stock at AGM’s option.
Under the Agreement, Mr. Belardi receives an additional annual bonus in an amount equal to 3% of the profits of Apollo’s Insurance Solutions Group International, the international arm of ISG.
The foregoing description of the Agreement does not purport to be complete and is qualified in its entirety by reference to the Agreement, which will be filed as an exhibit to the Company’s Quarterly Report on Form 10-Q for the period ending June 30, 2022.
SIGNATURES
Pursuant to the requirements of the Securities Exchange Act of 1934, the registrant has duly caused this report to be signed on its behalf by the undersigned hereunto duly authorized.
Athene (NYSE:ATH)
Graphique Historique de l'Action
De Sept 2022 à Oct 2022 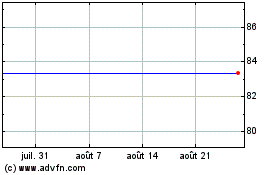 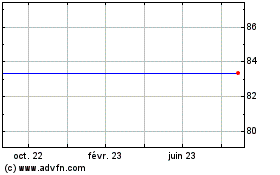 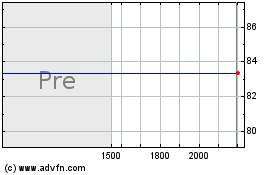