0,588739
-0,017117 (-2,83%)
Temps Réel
Marché Ouvert
0,588739
Bullish Ethereum Fractal Appears As Important EIP-1559 Upgrade Debuts
05 Août 2021 - 05:00PM
NEWSBTC
All eyes today are on Ethereum as the long-awaited EIP-1559 launches for the first time. The supply-focused update could result in a the start of a spectacular show that could last another several months. A fractal has potentially appeared that mimics the price action just ahead of the most recent explosive Ether rally, which took the top altcoin by market cap from below $1,000 to more than $4,000 at the peak. And it all is happening as the London hard fork is implemented into the most important blockchain in the space. What Is EIP-1559 And Why Does It Matter? Today, Ethereum Improvement Protocol 1559 will be set live as part of the London hard fork. The upgrade will help to normalize ETH gas fees that during the peak NFT and DeFi boom of 2021, sent costs skyrocketing. Base fees will be algorithmically determined by the network, however, the user can also increase the fee to in essence “tip” a validator. To prevent validators from artificially flooding the network to keep fees high, validators don’t get this base fee, instead it is burned. By destroying coins and taking them out of the circulating supply, investors believe this can further impact the ongoing “supply shock” or lack of ETH reserves on exchanges currently. In addition to this new EIP-1559 upgrade that could impact supply, it is part of a greater Ethereum 2.0 update. More than 5% of the entire supply is now locked up in the ETH 2.0 smart contract, in addition to the massive amount of tokens tied up in DeFi protocols. With so few ETH to go around, the supply shock could be very real and it arrives at the same time that a potential fractal is appearing on the ETHUSD price chart. Does an Ether fractal point to another parabolic rally? | Source: ETHUSD on TradingView.com Supply Shock Ethereum Fractal Fits Blueprint To Substantial Highs Ethereum was among the cryptocurrencies hit the hardest from the historic Q2 selloff. From the exact peak to the low, the second largest coin in the space by market cap plummeted by 61.8%. Related Reading | The Ominous Ethereum Comparison That Will Leave Bulls Petrified The peak was followed by two consecutive bumps, followed by a break of downtrend resistance. Zooming out, shows that the same exact pattern formed just ahead of the cryptocurrency’s more than 1,000% rally. Taking the price action on the way up and juxtaposing it over the recent consolidation, and there’s a very similar trajectory potentially forming. Could the EIP-1559 upgrade cause an extended fifth wave? | Source: ETHUSD on TradingView.com Zooming out further, the entire structure fits and five-wave bullish impulse according to Elliott Wave Theory. Even the math adds up. Waves 1, 3, and 5 move up with the primary trend, while even numbers 2 and 4 are corrective phases. Related Reading | Fundamentals Suggest Cryptocurrency Is Massively Undervalued Waves 2 and 4 tend to swap in severity, with wave 2 this time falling under the weaker of the two. The top altcoin only then suffered a 38.2% drop – another Fibonacci retracement level. Wave 4 reached the full 61.8% in severity, and if the bottom is in, a whopping wave five could be next. Wave 1 resulted in 450% returns, and wave 3 added another 1300% to boot. An extended wave 5 could yield dramatic results. Is this what is to come next for Ethereum and could it be due to the EIP-1559 upgrade? Follow @TonySpilotroBTC on Twitter or via the TonyTradesBTC Telegram. Content is educational and should not be considered investment advice. Featured image from iStockPhoto, Charts from TradingView.com
HUSD (COIN:HUSDUSD)
Graphique Historique de l'Action
De Juil 2022 à Août 2022 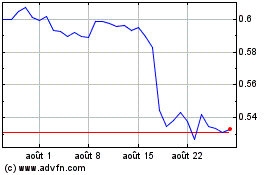 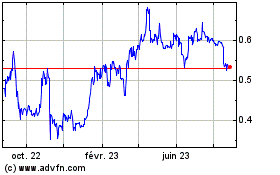 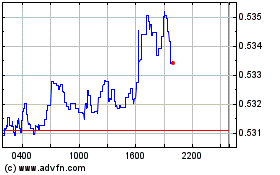